311 scores again with a great new single “To Much To Think.” For many this is one of the most anticipated music releases of the year. One of the truly great and original bands has not had a new release for somewhere around three years. Although they have been very busy with live shows, Caribbean cruises, and making beer, most of their fans love their music so much that they have felt starved over the last year or so. 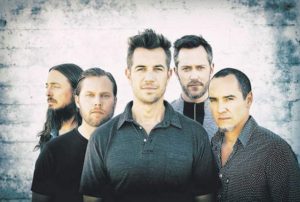 With the band’s monster hit “Amber,” which is also the name of their beer brand, they singlehandedly originated the smooth groove reggae that was hinted at by UB40 but has now solidified itself in the sound of 311. They add to that from time to time with some quasi rap, that now that I think of it UB40 did from time to time to – but in the Jamaican style.

Too Much To Think – Great Song?

Yes! From the opening drum lick to the signature guitar and perfect groove the song takes off. One thing that really sets this band apart and that I particularly like and wish I was better at this in my own songs, is Nick Hexum’s very smooth and clear vocals. Hexum really reminds me of Mel Torme’ – also known as “The velvet fog” because of his incredibly smooth vocal style. The way that 311 thins the song out right at the first chorus is very effective and dramatic. It is also noteworthy that the words are a bit defiant concerning a relationship, which is always a peculiarity in the reggae style, which is thought of as a sort of carefree and relaxed genre, but in actuality is a protest form of music originated by the Rastafari movement and the followers of Jah Ras Tafari or Haile Salassie as he was known when he was emperor of Ethiopia.

The rest of the song features a nice wha wha lead guitar part, and the obligatory rap that 311 usually includes in their songs – this one seems to be about LA and how when you’re at the top you can only fall etc. etc. Well good lyrics are hard to come up with, hell I wrote a song called “Hey-O” which just goes to show how desperate a songwriter can get, and don’t forget about the usual stand-bys. 311’s Too Much To Think is a very nice song that is going to be played at beach fired side parties for years to come.