The Band STAVROS has come out with a new single and album  called “Three Cool Cats.” Most of you will recognize this song as one done by the Coasters back in the 1950’s then once again by the Beatles in 1962 in their Decca Records audition. The song is typically ’50’s depending mostly on vocals and lyrics for its hooks. It was written by Jerry Leiber and Mike Stoller. The song is so good Stavros took the challenge to update it. 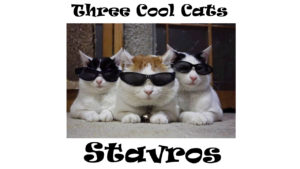 Now the Beatles song is updated by Stavros

When we first heard this song it really caught me, that is the Beatles version. Three Cool Cats was just that, very cool and I really wanted to record the song. However it sounded a bit “doo-op” in the Coasters version and the Beatles version – well you can hardly hear the drummer, who was Pete Best on this occasion. So when we recorded it I knew that we would want to update the sound a bit anyway, and give it that “Rock’n’Ska” Groove. With a song that is strong like 3 Cool Cats it is easy to put our own spin on it and come out good.

The worst thing about the past versions in our opinion was the guitar solos. They were played well and the notes are really right on, however, do to the recording equipment and the guitar amps of the time the sound is a bit thin.  We did not want to do a typical guitar solo though so we decided to go with a finger picking. Usually I use a pick to play all of the solos but in this case I really forced myself to use finger picking only. While not being a country sound the solo definitely reminds me of Chet Atkins who was really one of the best guitar players around. Also a guy that I jammed with a lot, Chris Martinez, has this amazing style and I borrowed some of what I think he would have done if I could have gotten him to do the recording. Chris is going to play a solo on one of our songs on the new album, but the songs are a secret as there are two covers that are really going to surprise a few folks – Always in the Rock’n’Ska Tradition. In addition to being available at the Stavros web-site, Three Cool Cats is also available at CD Baby.