Music is the Universal Language

Thanks for coming by – music is the universal language, it touches all of us together and each of us individually.

I remember standing in the weed-grown parking lot of a bar in Nowhereville, California – and loving it. The neon lights did not work so well, there were wide splits in the asphalt, but it was nearly full of cars, and the people who had left those cars were in the bar where I was about to play my first professional gig – and loving it! I am sure that you have had similar experiences, whether playing sports, being involved with an organization or whatever – just the part of it that you knew – hey this is what I am! 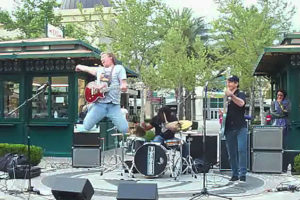 Fifteen years old and fronting my own band – Wow! It didn’t matter to me that the place I was playing was referred to by most people as a “dive” – I was loving it.  It didn’t hurt that it was an over 21 establishment, except for performers of course. As I walked up to the stage that night I clearly noticed the smell of cigarette smoke mingled with the smell of stale beer fighting against the sweet scented perfume worn by the beautiful ladies…Wow what an amazing feeling for me, just a kid of fifteen

Many shows later – too many to count to be exact – and a few albums later, here we are, just a few people that enjoy music – a lot! The largest shows I played so far were 24,000 per night for two nights at the Beijing Coliseum. Those were fun shows and a fun tour – well kinda crazy, you know what I mean. There have been many smaller shows, which are a little funner in that I can actually see the people and build a rapport between us, makes the show so much better.

Playing in the Hollywood club scene was a gas, I always remember stopping off at a taco track while going home after finishing up 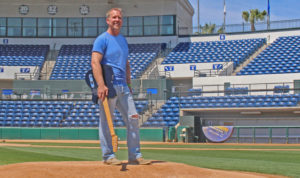 late shows.  We used to play at Gorky’s at Hollywood and Vine a lot – it was a 24 hour place and people would come by there after the shows ended at the Pantages or the Paladeum. between sets we would sometimes scurry down to Catalina’s and check out some Jazz Legend playing there – then scurry back to play another set.  One night Phillip Bailey came by and hung out – intrigued by our Rock’n’Ska beat.

I have met a great many musicians during my brief career, but the guy I am closest to is probably Jim West, “Weird Al’s” guitar player. Jim has worked on nearly all of my albums – he is an amazing musician, plays slack-key too. 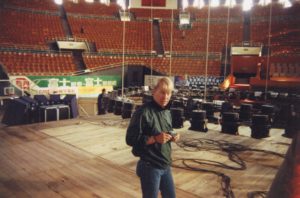 Stavros at the Peiking Coliseum

Writing, arranging, and recording songs is like working a crossword puzzle, playing a video game, or decorating a house just right. You really have to spend some time, be willing to redo, have a little luck, a lot of tenacity, but mainly enjoy it because the effort is the fun.

Then there is live performance – that is just like…Crazy Wow! And every time I approach the stage, here the sounds, and smell the smells, I am still the kid standing in that weed strewn parking lot…playing that first gig.

Thanks for coming along